Bach and Casals: A chance meeting in Barcelona

I finally finished reading Eric Siblin’s brilliant book The Cello Suites the other day. What a fantastic read! For all lovers of classical music – and even all potential lovers of classical music (by which I mean everyone else) – this really is a book not to be missed. The premise is simple: Eric Siblin, a reviewer of pop music, falls in love with the Bach Cello Suites upon hearing them live in performance one day and is compelled to trace their story. But what follows is a seamlessly-woven narrative of three stories, not just one. 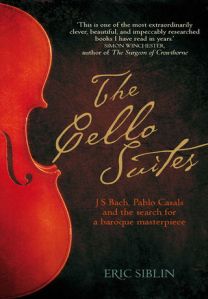 First, there is Bach’s own story – his life, his family, his career, his manuscripts, his employers and patrons, his colleagues. For a composer that actually didn’t leave behind a great deal in the way of solid documentary evidence of his life and work, Siblin has done the most amazing job of researching Johann Sebastian Bach (not to mention all the other Bachs, of which there were dozens!) and bringing him to life for twenty-first century reader. Then there is the famous Spanish cellist Pablo Casals, without whom the world may never have known about these six obscure pieces for solo cello. Casals’ story lies against the backdrop of political turmoil of Europe in the first half of the twentieth century, and Casals himself spent much of his life in exile from his native Spain. Eric Siblin writes a poignant and moving exploration of Casals’ musical, political and personal life. And then there is Eric’s own story – immersing himself in the music of Bach, interviewing dozens of cellists, listening to every available recording of the suites, visiting places that Bach and Casals would have known well in their lifetimes, and even beginning to learn the cello himself. It’s a story that borders on obsession, but we have much to be thankful for his infatuation because he’s given us a brilliant book from it.

At the end of March I was fortunate enough to experience all six suites in concert in St John’s Cathedral by Brisbane cellist Patrick Murphy. Such a great evening, with refreshments served between the second and third suites (and again between the fourth and fifth) to break up the performance a bit. I was only part way through the book at the time, but the fact that I’ve been reading it slowly over the last couple of months has meant that I’ve delighted in dragging out my exploration of Bach, Casals and the music. I didn’t even want to come to the end of the book, I was enjoying it that much.

Since this is a blog about music and stories, I thought I’d share one of the early passages from the book in which Siblin paints a picture of the day the thirteen year old Pablo discovers a published copy of the Cello Suites (which at the time would have been little-known – those who knew of them were mostly academics who considered them purely technical exercises). It’s an account he pieced together from Casals’ own recollections, from wandering Barcelona, and from various other bits of research, but he writes like he was right there beside the young cellist. I feel like I can hear this story in the way Casals plays the first prelude – that, and it transports me right back to Barcelona. (Photos are my own from about February 2008.)

It was a leisurely stroll through the streets of Barcelona, past the heroic monuments and flower stalls, the Gothic arches and fashionable cafes, that rescued the world’s greatest cello music from obscurity. To imagine the scene, which took place one afternoon sometime in 1890, we have to picture Pablo and his father walking along the Ramblas, the city’s most celebrated avenue, shaded by plane trees, lined with neoclassical mansions, and teeming with markets selling fresh flowers, local produce, and birds in cages.

At thirteen, Pablo was small for his age, shorter even than the cello he was carrying, with close-cropped black hair, searching blue eyes, and a serious expression out of synch with his youth. His father, visiting from Vendrell, had a few hours to spend with the young cellist who was making a name for himself in the big city – they called him el nen, “the kid”. Pablo, who preferred his Catalan name of Pau, was working seven nights a week in a trio at the Cafe Tost, which was well known for its coffee and thick hot chocolate beverages. Earlier in the day Carlos had bought Pablo his first adult-sized cello, and the two had their eyes open for sheet music the boy could use for his cafe concerts.

They strolled in the vicinity of the Columbus monument, towering sixty-two metres above the eight bronze lions at its base. It was a fiercely proud Columbus, the world’s highest, clutching a parchment in one hand and pointing to the Mediterranean with the other, as if suggesting future discoveries. At some point Pablo and his father would have left the singing birds of the Ramblas and entered the tangle of narrow, twisting streets near the waterfront. Ironwork balconies were draped with laundry and flowers. The occasional stone gargoyle screamed mutely. There was a faint smell of the sea.

Father and son made their way through the cramped streets to one second-hand store after another, rummaging for cello music. On Carrer Ample they went into another music shop. As they rustled through the musty bundles of sheet music, some Beethoven cello sonatas were located. But what’s this? A tobacco-coloured cover page inscribed with fanciful black lettering: Six Sonatas or Suites for Solo Violoncello by Johann Sebastian Bach. Was this what it appeared to be? The immortal Bach composed music for cello alone?

Pesetas were paid for the sheet music. Pablo could not unglue his eyes from the pages, beginning with the first movement, the prelude to everything. He glided home through the twisting streets to the rhythm of a music that was taking shape in his imagination, the sensual mathematics of the score filling him from footsteps to fingertips.

He would have heard the first prelude as an opening statement, improvisatory, like a leisurely stroll that ends serendipitously. The ground is prepared for all that follows: structure, character, narrative. The comfortable pulse undulates into more intricate passages. The baritone soliloquy grows in intensity, solidifying, gathering strength, ascending a great height where a vast panorama reveals itself. Pause for one beat. The stakes are raised. Struggle is pressed into service. In time, a satisfying denouement.

Pablo looked again at the score. He would practice it every day for twelve years before mustering the courage to play the suites in public.

Brisbane-based editor and choral musician
View all posts by Bronwyn →
This entry was posted in Literature, Orchestras & Instrumental Music, Travel. Bookmark the permalink.

1 Response to Bach and Casals: A chance meeting in Barcelona