If you’re in Brisbane this Christmas then it’s shaping up to be a warm one. The last couple of weeks have been generally hot and humid too, yet every time I go near a shop I still hear Jingle Bells and Winter Wonderland played over the speakers. Australians enjoy irony. I’m always vaguely amused when people from the northern hemisphere can’t get their head around Christmas falling in the middle of summer over here. Though that’s not entirely surprising, when all the traditions and popular culture associate the day with it being cold. Alas, no snow for us, or roasting chestnuts on open fires. We still sing the songs though – after all, a tradition is a tradition.

No, far from being chilly, Brisbane is hot and alive with colour this time of year. In fact, as I drove up my street the other day, it occurred to me that a tree decorated with tinsel is supremely overrated when I can look out my bedroom window and see this instead: 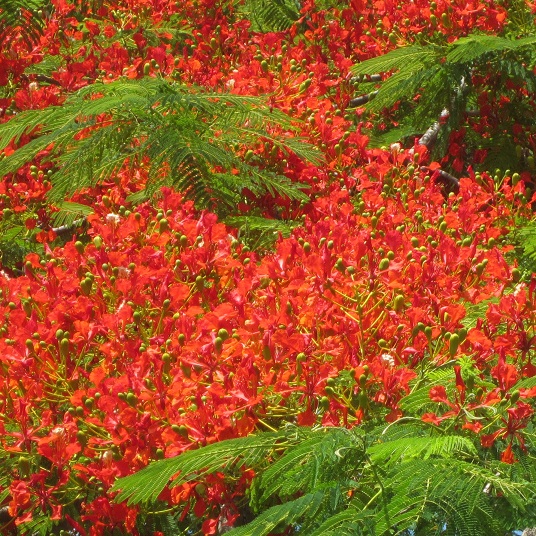 Nature’s own “tinsel”! I love the tropics.

In Brisbane Chamber Choir’s Christmas concert a week or so ago, we included a great piece which is very appropriate for celebrating this time of year in a hot climate. Sydney composer Matthew Orlovich has set a poem by Pat Edwards called ‘If Christ Had Been Born in Another Time’, which asks the hypothetical questions of how the Christmas story would be different if Jesus was born in a different small town in a different desert? After all, when you think about the story of the birth of Christ, the climate of the middle east, and the vast open and starry skies of the desert, it’s not hard to find parallels with the Australian outback. We are no strangers to heat, dust, big skies and long distances – even those of us who are primarily city-dwellers. So to mark this Christmas Eve, here’s an enjoyable and light-hearted alternative story for you to consider:

Would Mary and Joseph have travelled the road
Dusty and hot and tired
brushing the flies from red-rimmed eyes
longing to end the ride?

Would there have been no room in the pub?
Would they have been turned away,
while drovers and stockmen jostled the bar
toasting the end of the day?

Would the Southern Cross have lit up the sky
marking the rough bush track?
Would Kings have ridden in from the west
and would they all have been black?

What would have been the gifts they brought
for the Child with the light round His head?
Perfume and oil from a eucalypt tree?
Gold from a river’s bed?

Would cicada and kookaburra have sung
while angels on high looked down
if Christ had been born in another time
in a little outback town?

Wherever you are I wish you a relaxing and musical Christmas & New Year (or “holiday season”, if you prefer). I’ll be escaping the heat a bit down in Melbourne and catching up with family and friends, but I’ll be back writing again early in 2013. Season’s Greetings!

4 Responses to Christmas under southern skies