Four years ago today, I was just about to leave Vancouver after a really wonderful three and a half months living in Canada. And a couple of weeks ago, I picked up the travel journal that I had kept during that time and began leafing through its pages of scrawl and glued-in mementos, and was swamped with recollections of many little things I had forgotten. One of the things I wrote the most about was my experience of singing with the choir at Christ Church Cathedral, and the huge amount of new music I discovered by singing new repertoire every week. I had never been an ongoing member of a church choir before and nor was I even a regular churchgoer, but a chance meeting with Rupert Lang at a musica intima concert led me to ask on impulse whether he’d have room in the choir for a soprano for a couple of months. It was probably the best decision I could have made, opening me up to new music and new friends, who welcomed this crazy Aussie and made me feel at home. Since I was only working sporadically in Vancouver, the choir also gave my time there some structure with weekly rehearsals and services, followed by Sunday lunches at Milestones on Robson. There were a few other performances too, like the ‘By Request’ concert where the audience voted for the repertoire in advance, and Advent Lessons & Carols. So much music! This was probably where I discovered the adrenalin rush that comes from singing music on only one rehearsal (or less), and I loved it. And four years ago today I sang my last service with them. This entry was from my final week in Vancouver:

My day of departure draws nearer and nearer, and not only is my list of things [still to do] growing faster than it is shrinking, but I’m finding that I’m increasingly reflective about all my amazing experiences here and all the things I will miss. My time in Vancouver has certainly been defined by music probably more than anything else. I have heard some of the best choirs in the country, and sung with one of them too. Even fairly ordinary hymns are a joy to sing with the Cathedral choir. But I think my number one performance experience with the choir was singing Rupert’s ‘Kontakion’. It is just so moving, simple without being simplistic, as Tony put it perfectly the other day. The choir’s recording with Bruce doing the solo is just unbelievable. I could listen to it over and over again and not tire of it.

The first piece of Rupert’s I ever heard was ‘Agneau de Dieu’ when musica intima did it at a special Evensong in September. I knew then that I had to sing this piece one day so I made a special request to Rupert to include it in a service before I leave, so we’re doing it this Sunday, my last time singing with the choir. 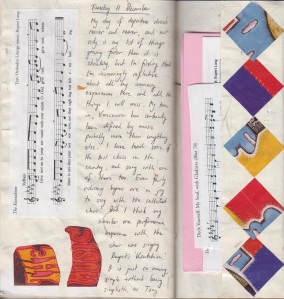 On the left there is the congregational refrain for Kontakion – tilt your head and sing along if you like.

And the piece where it all began – musica intima remains one of my favourite choirs ever, especially for the way they communicate in performance. Amazing what you can achieve without a conductor, eh?